October 29th - Chatting with the Master 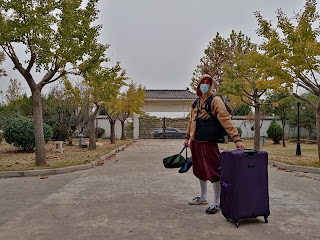 Tuesday was interesting. The weather turned out cloudy and not really suitable for filming/photo shoot. Master Bao and I did take some pictures with the Jian and the Monk Spade as well as take a video of the Jian form. After our short photo shoot, Master Bao and I ended up talking for quite a while. The conversation covered so many topics. Kung Fu, starting a school, past students, Master Bao in the past, martial arts then and now, Chinese culture, the meaning of Shifu (师傅), America, China, and more. He even showed me some old videos of him (check them out here).

Wednesday was a slower day. The weather was good but you could feel in the air that the time was concluding. We filmed more weapons: the Jian, Spear, and Monk Spade. No training, just filming for about three hours. Its interesting how you can feel like you're going fast but in the eyes of a camera, you are really slow. Master Bao did correct me on how I should feel/act during the forms, with the Jian I ought to be flexible, fast, and relaxed while with the Monk Spade I ought to be strong, fast, and intimidating. 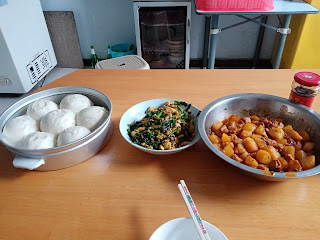 But, after that it was time for me to leave. My afternoon was spent walking around thinking about all of the memories I had at the school while Master Bao had some friends visit him. It was a quiet ride back. Master Bao asked me if I could edit the videos that we had been filming together. I told him I'd give it a try. As he dropped me off at the station he told me that I should keep practicing. I said I would.

Of course I will, my Kung Fu Journey isn't over yet.

Now, I'm in Shanghai where I will be spending the holidays. Hopefully I'll get some training in here and now but my main focus is to study/edit videos. We will see what the coming months have to offer but for now... I'm just going with the flow.