October 16th - "The Sword is like a Water Dragon" 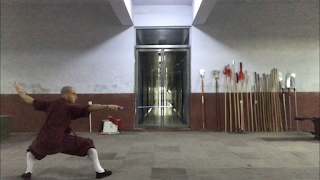 That is what most of my Friday has been full of. Ten kilometers (about six miles) down and a few hours of Jian practice. Next week I'll be "done" learning the Dharma's Straight Sword form but I have such a long way to go at performing it well. The same problems plague me: not enough speed, not fluid enough, and too stiff. Master Bao is more on the traditional side so I can't get a read on if I'm doing better or not. If I have a question or problem, he will answer. If I don't ask, then he will just watch me practice until he feels fit to teach me more.

My worrying came from me thinking I was doing too poorly at this form. Master Bao and I ended up talking about some of the uses of the moves which led to us talking about how each weapon has its own characteristics. Not just physical characteristics but also each weapon has its own way of being used. He said before in ancient times, when people would study Kung Fu. They would search for a weapon that suited them. The thing is, the master chose the student. Not the other way around. The masters understood that each weapon was better suited for a certain "type" of person. For the Jain, you might be tall, thinner, and flexible where as for a weapon like the monk's spade you'd need to be strong and have a lot of energy to use such a heavy weapon.

In present times the purpose for learning these weapons is to perform and study these ancient arts. He did say that finding what form/weapon that suits you is important but if you want to be a certain way then you have another option. Training heavily on a certain weapon can help your body build its needed characteristics. He gave the example of,

What I got from this example is that focus is important as well as the time you put into training. In a previous conversation with Master Bao, he talked again about ancient times where people would learn, say, five forms but focus on one. They can do all five forms. That one form they don't merely do, they understand it.

I hope to find what weapon suits me.

Maybe my "kung fu" is remembering all of these forms.