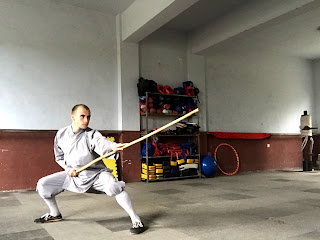 I still can't do an aerial but I am getting closer.

That's what today's morning classes were all about Jumping and Rolling under the guidance of Coach Qi. What I learned is that my jumping basics suck and I have very little control of myself while I'm in the air. Every move from my single knee jump, tornado kick, and even my butterfly kick all needed the same problem fixed! Jumping up and not forwards.

What I liked about Coach Qi's approach to teaching was he told me, it is going to take time to change these problems. I just needed more and more practice.

Other than that, Master Bao and Master Peng are still working on some videos for the school so I didn't really see them at all today. I did Forms and Power Training (legs) in the afternoon. Once the evening arrived I spent my time watching The New Shaolin (2011) which was fun. 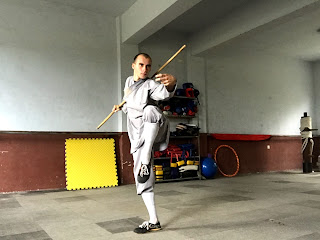 Yesterday, I had a good talk with Master Bao on a variety of things but today what stuck out to me was him saying how much Shaolin has changed over the years. Not the martial art per say but the actual culture within Shaolin. He talked about masters, some that I've even heard of, and their current situation with Shaolin, how it is more of a business now than a temple, and how he and other monks of his time are not recognized anymore. It was quite a lot to take in. This topic even lead him on a rant about a "new" kind of monk, the business monk, and how money/government has effected a lot of what goes on in Shaolin. (The government even replaced the head monk)

His rant really gave me some insight into future plans of mine. He said there were other temples out there that still had the "Shaolin of Old" feel to them or were real temples, not tourist attractions. My wanting to go train at Shaolin gets less and less the more that I hear from those who have actually lived there.

What ever future journeys I take, I think I will discover more and more.

Also, I'm excited to learn the Monk Spade in the next coming months. 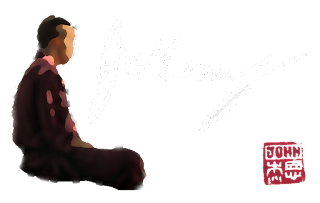