The weekend was interesting.

Sunday was spent training with a trip to Maling Mountain.

Master Peng invited me to go with him and Master Bao to Maling Mountain for filming. We were there for a while as Master Bao's "brother" took us to various locations in the park, including some hidden locations. While we were filming the Straight Sword, something interesting happened. We saw a monkey climbing a tree. Then he started screeching.

The Masters started to laugh and joke about the weird sound the monkey was making but the only thought going through my head was, "He's searching for some one". We started to walk down along the bridge to go film the spear and next thing I hear is Master Peng shouting, "Oi oooooooh!" while backing up. The other monkeys had arrived, a male, a few females, and some babies. What proceeded next was frantic backing up where I somehow got put in the front of everyone. But the day would end without a test of my Kung Fu as we managed to back out, though the male monkeys followed us until we were off the bridge. As we left they went crazy in the trees, I guess celebrating their victory.

We then checked out a couple more spots for filming before heading back. It was beyond closing time when we exited the park as there were very few people around. Master Bao dropped Master Peng, his "brother" and I off at some restaurant in Wang Zhuang then left. The evening was spent talking and eating some good food (which I forgot to take a picture of). When we all got back to the Kung Fu School, Master Bao and Master Tang were both outside practicing various forms for the filming. Even Coach Qi practiced some of his Performance Baji Quan! It was cool to see.

This is what my Monday has consisted of. Master Bao talked to me a lot about how Shaolin has changed over the years and how I should adapt to training in Winter. I even showed Master Bao my Monk Spade that I had bought a while ago, upon seeing it he said, "After [Da Hong Quan], I'll teach you this". He said earlier that the Monk Spade isn't his specialty (his is the staff and broadsword) but I'm glad that he is going to take the time to teach me. Maybe this weapon will become my specialty... or maybe the cane will. Who knows? 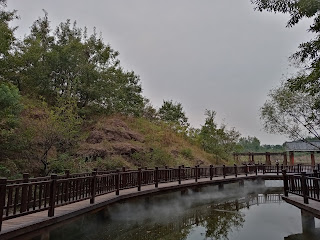 Just your typical Monday from the wanna be warrior monk.

Hope you're all having a good start to your week!