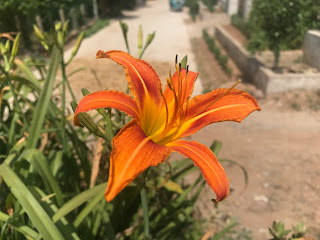 Another early morning on this Kung Fu Journey. My weekend was packed full of exploring, eating, and relaxing. This week, so far, seems to be packed with new and exciting challenges; one of them being learning the Spear (红缨枪)!

After a grueling Basics Class of kicks, kicks, and more kicks, Master Peng during Forms Class began teaching us the Spear Basics while the Chinese students studied Lian Huan Fist (连环拳). Feedback about the spear from other students is mixed but I really enjoy it. It's hard not to feel cool while practicing the spear. Everything from the shining spear tip, waving red tassle, and shaking of the spear at each powerful move makes it so fun to practice. Later on, Master Peng told me what form we would be studying, Shaolin Competition Spear Form (少林竞赛枪).

Sanda Class recently has been run by Coach Qian due to the shortage of Masters so class has been very different. We start off by warming up all the joints and then that leads into some pushups. Once we've warmed up, we work on shadowboxing combinations then go into bag work. Many don't like this way but it feels just like any other MMA gym that I've been to. Like Master Bao said,

"Sanda is simple. I can teach you the few moves but you must practice them for a long time and spar in order to get better."

My evening was spent working on jumps and tricks. Things like the kick up, butterfly kick, handstand, head flip and more. I realized that many of my early goals (things like front/back sweep) were accomplished a while ago so... time to find new ones. There are 5 "basic jumps" that we should be able to do, butterfly kick, aerial, single leg kick, sweep, and tornado kick. These moves act as the basics for doing other Kung Fu Tricks (back flip, front flip etc). It'll take a lot of work but I should be able to get there. I'm just trying to follow Master Peng's advice and find what suits me. 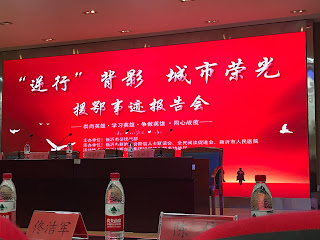 Friday started out just like a normal Friday at the Kung Fu School would: running 2 km, Power Stretching, Forms Class, and then Lunch! It was after lunch that was different. As I was getting ready to go to line up for our Stamina Training Master Peng appeared at my door asking if I'd like to go with Master Bao and him to a meeting about the corona virus. He said it could help my Chinese listening so I said sure!

Mask on. Hour drive later. Xinyi. Master Bao took us in to some sort of business building where a huge meeting hall was set up. Someone saw Master Bao then brought us to the second row to sit down. After a bit of awkward waiting it finally started.

The gist of it was that this meeting was five people who were apart of the first and second medical teams sent to Wuhan in order to deal with the Corona virus outbreak. One doctor, four nurses. They all had widely different jobs so each of their experiences/challenges were very different. They also were all very different people, some had kids/family while others were younger and just starting their career. What I could understand I found interesting... I also found it really interesting that they would teach the patients Ba Duan Jin (a Qi Gong set that we train here) since it focuses on controlling your breathing. They would use this to monitor/test how the patients breathing was doing.

During the Q/A portion of the meeting people asked a wide variety of questions. Things like, "Were they conflicted about going to Wuhuan? How did your friends/family feel? Why did you guys keep a video diary/journal? What were some of the struggles wearing the protective suit? etc etc. One question I really listened to was, "Things are relaxing now, so should we still wear masks? Follow the rules?" The male doctor answered this one by saying that wearing a mask is still advised and that we should always be cautious since parts of China and the world are still being effected but we can relax a little bit.

At the end, some government guy went up there and talked for a bit. Everyone applauded. Then it was time to go. 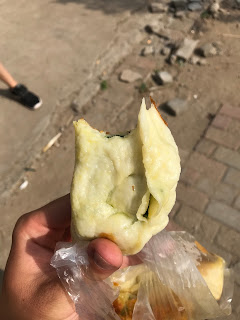 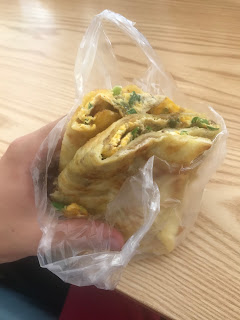 Early was the start to my morning. JD had made a plan to leave at 7:30 am for Wang Zhuang just to see if there was any new street food out there to eat. After inviting everyone only four of us went through with the plan. JD, Terina, Matt and I. We set out on the bikes in search of food. And man, did we find it. Driving there the roads were busy but the actual town itself was very quiet as things were just "waking up". We all grabbed drinks from "Chayese" and then started walking around. It didn't take long for us to find some new street vendor selling fried goods. We all bought one of everything and just feasted. What we got was some sort of dumpling with egg, onion, and tofu. A steamed bun with meat in it. A fried cabbage roll. All of it was oily. All of it was delicious.

There was some other stuff that we found but didn't buy. Things like fried bread served with soup, You Tiao (油条), dumplings and a few other things that I didn't know what they were. For Lunch we ended up trying these egg pancake things that were amazing. Just writing about them makes me hungry. 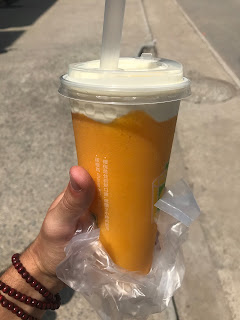 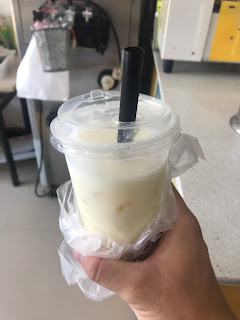 After getting the amazing egg pancakes we stopped by "Chayese" again to grab drinks. The lady there knows us quite well so she just recommends us a drink and we try it. They are always 好喝. Terina had to return to the school because she wasn't feeling too good but Matt, JD, and I decided to continue exploring the town. We ended up finding another restaurant called "Pineapple" that has amazing drinks and 麻辣烫, we also found some nice views outside of Wang Zhuang. It was time to head home after a good half day's worth of exploring. 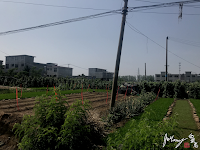 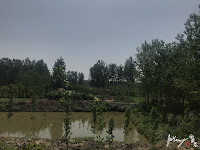 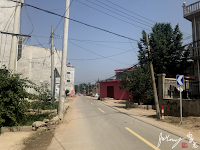 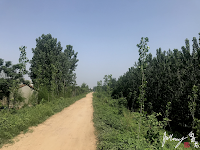 Sunday was spent resting, cleaning, and eating food. My legs were still sore from Thursday's Power Training but in the evening I managed to so some light training with some of the other guys. They bought some new mats for the school so we had fun breaking them in.

I'm wondering what in the world will happen this week?