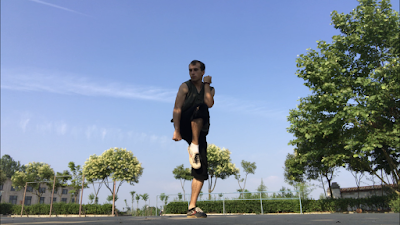 Today, I sat down after playing some Gauntlet and forced myself to write this blog post. My mind was kind of "fuzzy" because of how the end of last week was but today it is more clear. Training was just Shilat, Josh, Matt and I. JD is injured and Philip's knees have a problem. Only Matt and I did the morning/afternoon 2 km run which gave me "flashbacks" to running by myself in Wisconsin. Basics Class was ran by Master Peng (as all the classes are) which focused on flexibility and kicks. The first half hour was just the front split, Matt and I made huge progress. Master Peng thinks that if we keep training like this everyday for this week then we'd both be able to touch the floor by the end of the week... we will see.
Forms Class was focused on the spear. Wednesday, we will start learning the actual form. We all drilled the various combinations that we've learned until we were sweating. Training is definitely more relaxed than before since there is only one Master and a handful of students. Which is good and bad. The good is that we feel like a really close group while the bad is... its quiet around here. Less people training in class just feels odd to me but maybe we all will make a lot of progress since the Master will have to focus on the few of us. 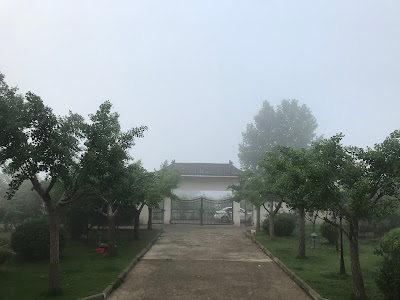 In an effort not to get dragged back down "lazyville", I spent two hours after lunch practicing and stretching and another hour after dinner working on the splits. Sanda Class is a bit odd, Coach Qian has taken over and actually taught us some stuff today instead of us doing our own thing. We worked up a sweat, learned a few kicks, and just had an okay time. I don't think Sanda will be a focus of mine but Coach Qian is a nice guy who is trying to help us. Just one of the many things that changed here...

The previous week flew by (with its rainy and gloomy weather) as we started to say farewell to two students, Bryce and Raja. They both left Friday Morning but before that was a peaceful Thursday.
Thursday is our normal relaxing Qi Gong and intense Power Training day. Master Peng led us through meditation with some peaceful music and then started to teach us the sitting version of Ba Duan Jin. I really enjoyed that. Conditioning went by with little issue, just some really red hands and a sore body. It was Power Training that would kick all of us to exhaustion. We worked on our core today which involved 3 minute bridges, 20-40 ledge sit-ups (torso hanging off an edge, someone holds your legs), 1 minute ledge hold, 20-40 back raises, and another one minute ledge hold... for many sets. People's arms went numb, backs were sore, and abs were tired. After that... Josh helped me do some recovery/relaxing exercises so that I wouldn't be sore and then, like any sane person, I started to do kick-up practice. (Finally I can do a kick up!) 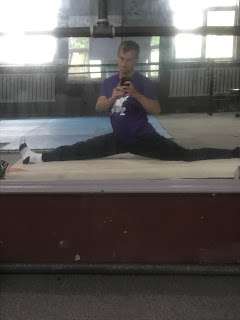 Friday, we said goodbye to Raja and Bryce then did a very quiet Power Stretching. My legs were sore after but it must be helping. Forms Class was focused on making sure everyone knew all of the combinations that we have been working on with the spear. An hour of drilling the spear passed by and next thing I know it is lunch time. I had some weird stomach bug going on all last week so I was eating little and running off of Chinese energy drinks but the stomach cramps were so bad that I just fell asleep. Which led me to not running the 10 km. Which led me to having a very lazy weekend. (That means there isn't much to write about!)
Which circles us right back to the present day. Although the weekend had amazing weather it seems we are right back to a rainy week leading up to the Dragon Boat Festival. Hopefully I'll get some cool pictures of that as I'll be in Xuzhou!
How was your guys' weekend?