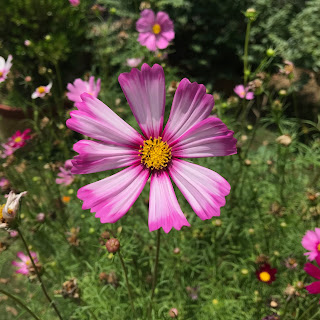 Start of the Week - Grading

The days are blurring together recently. So much that I forgot about grading this month. No one was prepared for it and only three of us graded something. Matt and I did our staff form (阴手棍) while Raja graded his bull whip form. It was one of the quickest gradings that we've done, and it was the first grading that Master Bao and Master Tang watched (but they didn't seem too impressed).
Before Grading, Master Bao "ran" the Basics Class which was in some extreme heat. All of us were soaked after a few minutes of warming up. It was a strange class as Master Bao kept asking me and Fei Yu (a Chinese Student) what we normally do for class. The Grandmaster asking us what to do just felt odd. We worked on stances and various Wushu (武术) combos. This did make me realize that I enjoy doing the Wushu combos even though they are only the 花招, showy tricks, for Kung Fu.
After Grading, was Lunch where I ate a small amount due to me not having an appetite. I spent the rest of my time working on Wushu moves and hand/headstands. Time flew by and before I knew it, it was time for Sanda Class. I felt like I had no energy and no power during the whole class. Even though it was just a mental block, I couldn't get past it. Coach Qian tried to help me with my kicks but I was just off today. Less people came to this Sanda Class as well since we are doing class by ourselves...

Saturday was an eventful day as JD, Terina, Matt and I all went to Wang Zhuang Village. Our purpose for going was the usual, just to get out and get some good food. With us becoming more and more familiar with Wang Zhuang we have been able to find more places to get different kinds of street food. "Pineapple" has become my new favorite place to get drinks (Sorry Chayese) and the street vendors all have delicious food like buns, wraps, fried egg, and even tofu. It was nice to get out.
Sunday was a strange day as I slept in, did some morning cleaning followed by some morning training, then I fell asleep again. After my "nap" I ate some lunch, practiced with the spear, cleaned some more and after cleaning... fell asleep again. When I woke up I spent the rest of my night looking into Chinese Mythology (trying to get some ideas for D&D) but I was so focused on learning the mythology that I missed dinner! Instant Noodles for dinner and finished my night by talking with my girlfriend until I fell asleep again.

We're all in a funk here at the school. Probably because a big change is coming, many students leaving at once. Terina, Raja, Bryce, and maybe Shilat.That would leave Matt, Josh, JD, Philip, and I. Only two Chinese kids are left and the Masters are few. My stomach has been uncomfortable for three days but as our Masters keep reminding us, we came here to train so if we can breathe, if we can walk, then we can train. So I've been pushing myself through today's Basics and Forms Class.
Tuesday, I did give myself a break as I didn't go to Applications Class but the following Sanda Class was something I wasn't prepared for. We practiced catching kicks and take downs which somehow lead into a few rounds of light sparring. My stomach hurt and my body was tired. After a mentally exhausting Tuesday I fell asleep thinking about Peanut Butter Jalapeno Bacon Cheeseburgers.
We will see how the rest of the week goes.
Hope yours is going better than mine!