Well, that was a terrible night that lead to some of the most peaceful sleep I've had in a while. I don't know if I ate too much or ate something wrong but my stomach was in pain for awhile but now that its morning it is okay. I hope my stomach and knee do okay for today's training. 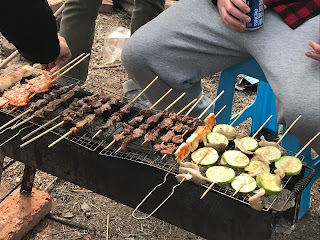 This was a pretty fun weekend, besides the "bad news" we ended up getting on Sunday. Master Yan threw us a Barbecue on Saturday that turned out really well. There were all sorts of meats, tofus, breads and veggies being grilled up and served on a stick. It was also fun to just help set up the BBQ with all of the students and masters. Videos and pictures were taken, arms were wrestled, a lot of food was eaten and conversations were had. Overall a great and lazy Saturday as after I ate so much during the BBQ I didn't want to eat anything else.

Then Sunday came where we all planned to go to a nearby bigger town to get money, different groceries, supplies and maybe eat out. About 7 out of the 9 students here were going so we even rented a "took took" to come and pick us up. Then Head Master Bao came and stopped us. After talking with him for a bit in Chinese he said that the government has made bigger restrictions on our school and in Xuzhou because of the Corona Virus. All schools in China are supposed to be closed but because we are a "special school" we are allowed to stay open as long as we follow government regulations. Now, the regulation is we cannot leave the school grounds until the outbreak is contained. Two new students were supposed to come here but one got stopped in Beijing and sent home while the other one was in Xuzhou and got sent home. 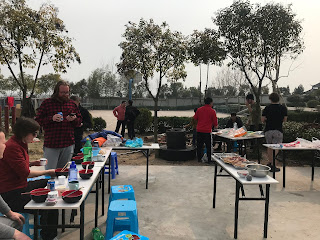 It makes me realize that even though our area is fine, other cities in China and other countries are still dealing with the Corona Virus.

So, now we're literally locked in to our "secure" kung fu school (that is missing a perimeter wall). The students and masters cannot leave. A bit demoralizing after a great Saturday but I spent the rest of my Sunday reviewing my forms until my stomach started to feel bad.

I ate a light breakfast of hot water, milk, banana, some breakfast crackers and other smaller things to help my stomach but during basics and forms class today I felt uncomfortable during the whole time. I was tired, no energy, and just not feeling right the whole time. I didn't give up even though I wanted to.

I ended up sleeping after lunch to see if that would make my stomach feel better and it did so I went to Sanda class. Sanda is always tough and man I did bad as usual. We were practicing low kicks, push kicks and high kicks. I can't even do a low kick or a push kick right so working on the kicking combos (which was our last exercise) was difficult. I don't know why I can't kick well in Sanda class, during our last sparring match I was told I wasn't using enough power in my punches too. So, both of my "weapons" are bad. Too slow and not powerful. That's why I came here though, so I could improve myself.

I spent an hour stretching my legs, mostly focusing on opening my hips so that my side split and stances can get deeper. I've realized that the splits are good goals if you want to focus on certain aspects of Kung Fu. The side split helps your stances a lot, and vice versa. From what I know the side split stretches a lot of tendons in your hips which allows for a better/wider range of motion. The front splits focus on different parts of the body, mostly muscle. If you do a front split then you will have higher kicks. I have noticed this because of the other students, most students with really high kicks can do the front split or are super close to doing a full front split. Students that are able to go low in the side split (no one besides the Masters can do it yet) are also able to go low in their stances.

I still think this is my number one goal here, to be able to do the splits. Why? Because, just like practicing basics, it improves everything else that we do in Kung Fu. I'm still not sure if power stretching is helping me or not, we also don't do it that often, but I do know that this continuous effort towards stretching has helped me improve my Kung Fu.

But, my next challenge is approaching. I'll be learning the Shaolin Staff (少林棍) starting Wednesday from Master Yan. Of course I'm excited to learn something new but I was expecting to learn more hand techniques or maybe go into more detail of Shaolin Tong Bei Quan. I've always heard about the warrior monks training Basics for the first year and then training one form for their second year, but at this Foreigner Kung Fu School it isn't like that. Which is good and bad. We get to experience more and see what we really want to focus on while we're here (jumps, basics, forms, sanda, tai chi etc) but the bad is most of us just end up being "okay" at our focus and bad at the rest... or worse, just bad at everything.

I do all the extra stretching and training for two reasons; because I want to and because I feel I have to in order to keep up with the classes. Jumps and Rolls class and Sanda have to be my worst performing classes where as Basics and Forms class are my two "best" classes.

It'll be exciting though learning the staff and then the sword. I think I'd rather build a focus with one weapon rather than learn a whole bunch of weapons that I might forget but it is hard to choose just one. The Shovel and Staff seem to be the coolest weapons to me. I still have a lot of time to try things.

How has your Monday been?