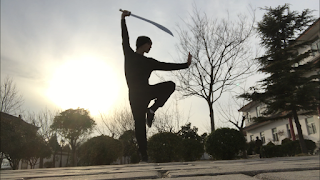 Another Tuesday night down, I'm tired and sore today after Jumping and Rolling and failing at the kick up. Yesterday was a good day of Basics and learning a new weapon the Broadsword! (刀) Master Yan is teaching me the sword and he gave me his sword! Since then, I've been working on my Broadsword Basics (刀初级) and reviewing other forms. I was surprised when Master Peng told me I would learn the sword so soon. It was because my Shaolin Tong Bei Quan was okay during the testing. To me, I think that means I need to practice it more. Besides me needing to review our classes were good today.

Our Applications class today was different as Master Ning, the Tai Chi Teacher, taught it today. We learned two applications; a shoulder push and some kind of twisting push. Both very useful but the second move is too complicated for me to perform with confidence. That is the one problem I have with Applications Class, sometimes we learn moves that are simple and quick while other times we learn complicated moves that only masters could use. Those complicated moves then end up being... inapplicable. 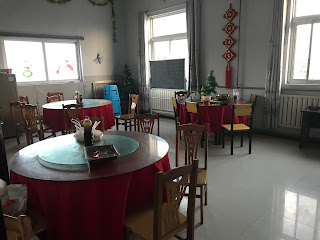 After lunch I spent my two hour "break" reviewing Shaolin Group Form, my new Broadsword moves, and then worked on the splits. The weather recently has been really good as it is slowly getting warmer and warmer. So warm that some of the students were tanning. The warmer weather just means I'll have to drink more water and take better rests when I'm practicing on my own. At least those hot Xinyi summers that I heard about are finally on their way.

Sanda Class was good, and interesting, as well. We were learning different ways to catch an opponent's kick and how to take them down but during the class Grand Master Bao asked Raja to spar this big Chinese kid. There were many Chinese guys that came to our school to watch Raja and this kid fight which interrupted our class but was fun to watch. I'm still not sure why the sparring match happened but Raja had a lot of fun. I think these take downs that we were learning are very useful but are a little difficult. 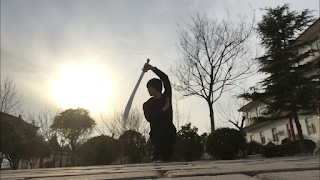 Baji Quan Class started late because Master Ning didn't realize that I wanted to attend the class. I spent half an hour reviewing on my own when I found Master Ning meditating outside. I learned four new moves to the Baji Quan Xiao Jia form. I forced myself to take this class today because training helps clear my head of doubts or worries that I have and I think this one on one class helped me the most today. I not only learned four moves to this form (where previously I was learning one move a class) but Master Ning and I talked in Chinese about what is true Kung Fu. Now, each master has told me a small bit of their idea of true Kung Fu and now Master Ning was giving me a small bit of his idea.

To him, a primarily Nei Jia Martial Artist, harnessing the internal "relaxed" power is one of the higher levels that one can reach. This was a point he made from a previous conversation but today he talked about making moves "natural". He said something along the lines of;


"If you have to think of the moves while performing or fighting then this isn't Kung Fu. True Kung Fu is when your mind is calm, and you don't need to think about your moves. When thoughts don't cloud your mind or when your mind isn't clear then you haven't reached true Kung Fu. All Chinese martial arts follow this idea."

He then recommended me to read "道德经" by 老子 to get a clearer idea of what he was saying. I think I might try to find this online or snag a copy while I'm in China. I really like that each teacher is willing to take the time and explain these kinds of ideas to me as it makes me appreciate the Masters more and more. I hope, even though I don't understand 100% of what they are saying, that they can see I enjoy their stories.

It is late and I'm tired but I wanted to write what all happened today.

We're halfway through the week, how are you all feeling?