August 05, 2019
The month of July passed by quickly with many ups and downs but as the new month begins it already seems like it will be a good one.

My Training in July wasn't the best as the intensity and the amount of training I did decreased a lot. Work and home have effected my flexibility training to where I've lost progress on the splits by a lot. I'm back to where I started but I have been trying to focus on "sparring drills" (the best I can doing solo training). I've also been trying to incorporate lifting workouts and various body weight workouts to build strength. Everything from push ups, sit ups, pull up and more. Since I currently don't have an access to weights I must use my body and random things to help me train.

The month of August already seems to be a good one as I've already gotten what I'd call a "promotion" at work. I'm able to move to 3rd shift and get hired on to the company, both give me an increase in pay and more responsibility. Though nervous I am taking both opportunities so that I can make up for a lot of the money I lost in July... I hope.

Another thing that I did which was pretty cool was go on a fishing trip with family member and family friends. Most of the fish we caught on the carter boat were big ones. A big 26 lb King Salmon, a 12 lb Coho Salmon and a couple more Kings. The 12 lb Coho was a boat record and many captains on the dock told me that was a rare find. I'm not a fisherman so I didn't quite understand it as the 26 lb King Salmon seemed more impressive to me but one of the family friends explained it like this:


"Catching that 12 lb Coho was like winning three gold medals in one of yer Tournaments."

That helped me understand it a little bit and now looking at it, I'm happy with my catch as thats the biggest fish I've ever caught. The only fish that came close was a Big Bass that I caught when I was really little. 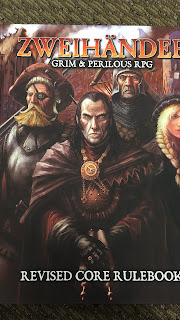 Wow, a gaming section. I'm sure many of you are surprised about this but yes... I'm slowly getting back into "gaming". By gaming I mean Table Top Role Playing Games as my dad is moving back into country and I might be able to start playing games with him again.

While I was in MN helping my dad move back I saw Zweihander: Grim & Perilous RPG at a Barnes and Noble and decided to buy it as both my dad and I had an interest in it. After taking about 3-4 days to read the rules and solo adventure that came with it I am intrigued. To me the system itself is something I've been looking for, tough combat, interesting magic, and a new take on character creation. The setting of "grimdark everything" isn't what I'm looking for but I think it would fit with a medieval style campaign that I've been wanting to run for a long time.

I also bought the two buck "solo rules" from DriveThruRPG.com and, though I feel silly for buying them, they're gonna help me run a couple test games so I can see how the rules all work together before I try to run this game with other people.
How has your start to August been?