So I had another longer game session this time and this time I was able to deal with: the Land Nav Fail Chart, Using Points, a possible new rule, "standard" gear, and a couple other things.

First off I'd like to show my game area and how I'm playing this game at the moment. 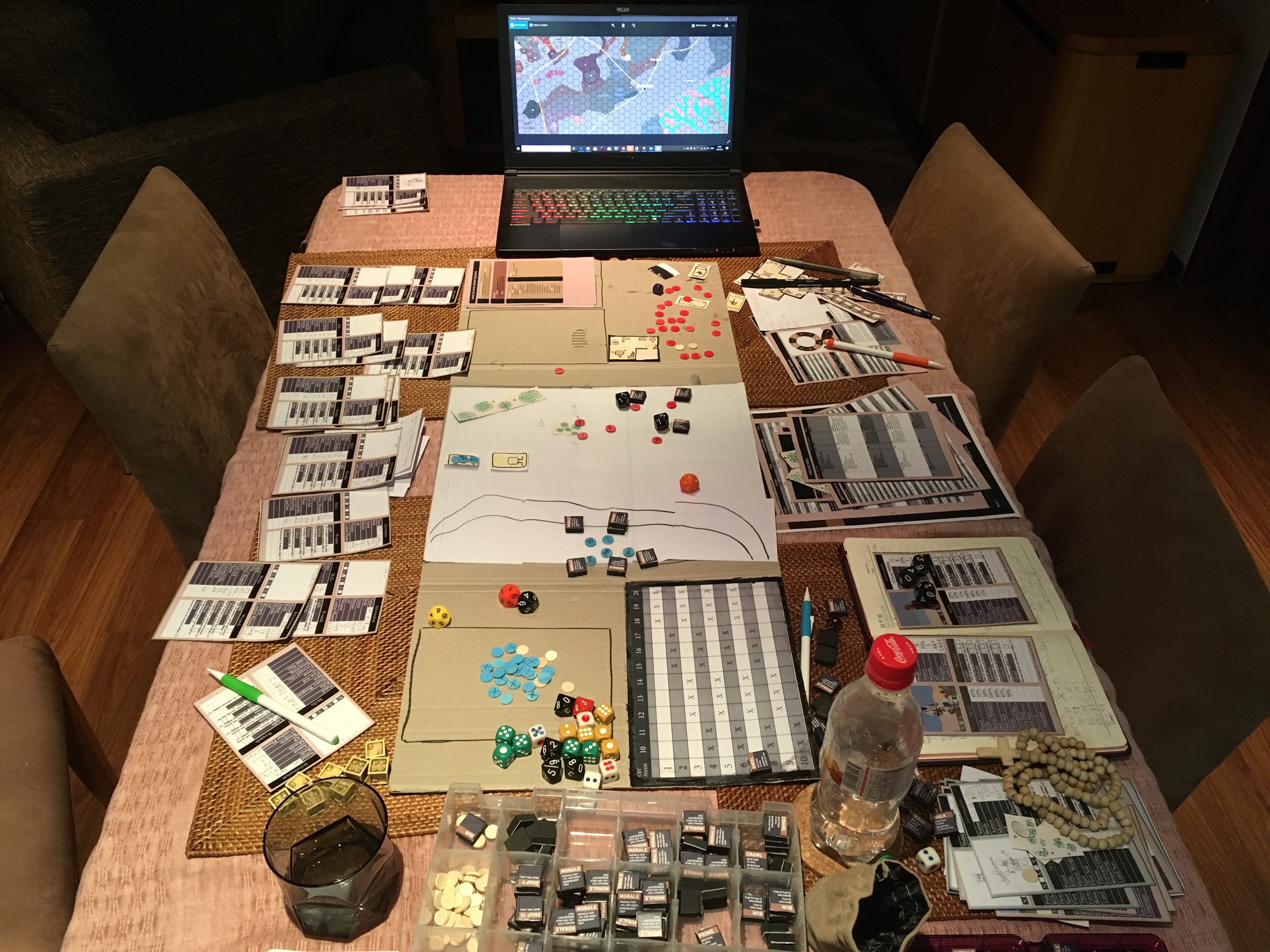 We play on this foldable card board sheet with paper that has a laminated sheet on it so that we can either use markers or place our paper terrain tokens under the laminated sheet. Then for soldiers we use marked wooden chips. Blue represent allies (USMC Platoon) and the red represent the "bad guys" also known as my guys.

So now we get to the game. We ran two patrols today.

Patrol 2
They awoke in the morning at FOB Rome. Lt. Cobra went to his HQ and was told by his head medic Scarlet that the villager they had hit with the 40mm had recovered well over the night from the wounds. The attendant then gave Cobra his new morning orders from HQ. Turns out their Commanding officer of their sector had been replaced with a new commander code named "Zeus" (a small background element I threw at the USMC player) and he had a mission for them. He told Scarlet to let the villager go on their own with a MRE and some water. He began looking over the new orders.

Mission: Scout the valley road north east of the base at Hill 150.

Purpose: Find out if there are any insurgents hidden within the hill.

"Locals reported that as they traveled along the road through Hill 150 that they were constantly being shot at. No matter whether they were on foot or in vehicle. Because of this public traffic is endangered and the town of Barbaraalo isn't getting their various supply trucks into the city and fear sending any out. We don't have much information on any factions in the area and we aren't at war so this is just a recon mission."

Rules of Engagement: Do not fire unless fired upon, contact command with any potential targets.

This is the mission I interpreted from the patrol chart I am working on and this is close to the description that I give the player. The USMC player then decides what they want to do and how they want to do it. Originally I hadn't thought of the ROE until later when they were AT the mouth of the valley but came up with it on the fly. The USMC player went with a M1117 and a M113 loaded with a fire team and set out. After having a failed land nav roll (which had them drive in a circle

) they met contact at the mouth. Two groups of what seemed to be insurgents were camped along the east and west sides of the valley just staring at them. (I had them deploy first on the table then showed what they saw and began working in phases). The first phases had nothing happen as the insurgents kept to their "guard/show force" mode and the USMC had a back and forth with command until the command said "open fire". The first volley of fire was devastating (the insurgents were all in the open so no needed to spot) and they lost many. The insurgents didn't even fire back and those that survived retreated.

Once the enemy left the board I stopped following the "combat phases" and had them work on their own investigating the bodies and contacting command. They then returned to the FOB with some scarves that the USMC player thought were important and a couple more AKs. I gave the player points for each kill (10 pts a kill) and asked what they wanted to do next. They actually thought of a mission on their own. The USMC player wanted to return in the night and send a team out in the mountains to confirm that there is actually more to this group. Command approved the mission with the ROE that they had to positive ID before they fired based off some parameters: Black or Red Scarf, Armed, and obvious intent to harm the soldiers.

This brought up a question as to if NVGs were standard issue or not in modern day. During the USMC player's time they were not but now a days we thought they were based off of various movies and films about the Iraq and Afganistan war we had been watching. If they were not they were going to cost 5pts per soldier and he didn't want to pay that but he did swap an Assault Rifle (10 pts) for a Combat Shotgun (10 pts). After getting kitted out they began to move out but lost a couple hours due to a possible (false) IED spotting along the road and getting lost again. (They really need a new patrol lead) After arriving at the mouth of the valley they sent the fire team up the mountain and left the sniper team with the vehicles in a defensive posture. A couple land nav rolls through the mountains later and they had found a small hut with lots of activity. (2 average africans, 3 Novice africans, and a veteran african) After some spotting rolls and the Africans began searching after hearing something they confirmed the ID of one soldier and let loose on them all. Another easy battle occurred for the USMC but they split their fireteam as they saw one african wearing body armor escape. They tracked him down and killed him, found a map and blew up the hut. The team radioed in to the vehicles and told them to drive down the road and meet up at the half way point in the valley. More land nav rolls for the Fire team (not the vehicles) and they were ambushed at the road (due to a failed land nav roll). The first real fight happened where the Fire team were on the high ground and the african guerillas were below on the road. The vehicles wouldn't arrive till phase 7 so they had to hold. One soldier was wounded, many guerillas fled, and the vehicles arrived to make the rest flee. Forgetting about looking at the bodies they got their now medium wounded soldier in the vehicle and began to drive back but (another failed land nav) a rpg shot at them causing them to go off course taking longer to get back to base. Then they returned getting points for each killed but losing some for the wounded USMC who will miss out of 5 patrols.