I haven't posted in a couple of days as I've been busy working on terrain and studying Chinese! But I finally found the time to post this update. 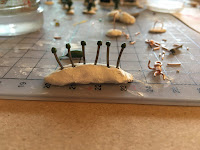 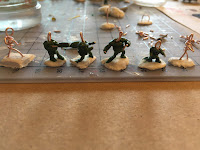 The first update is that I've made much progress on the Sci-Fi Centurions. Sadly these pictures are a day or two old but I wanted to show how I did each phase. As you see I sculpted the armor of a few more guys. I also have the weapons on most of them now and as seen in the picture on the right I've started working on the heads. I thought about leaving the heads seperate and having to cast the heads but in the end I attached the heads to the bodies. Almost done with 8 Centurions... not the 12 I originally had planned but will still be enough poses to make a wide variety of squads. 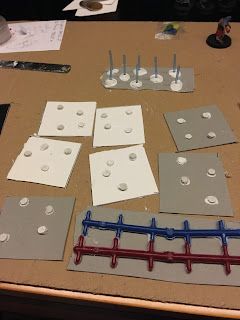 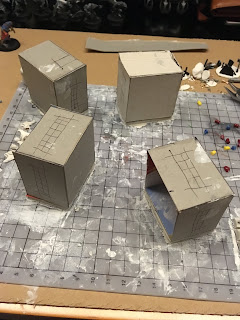 The next update is about terrain. I've decided I wanted some more terrain that is "tangible" instead of 2D so I am reworking the houses to include clay walls and windows. I've also started work on woods, landmines and making railroads out of some sprues that I have. Hopefully I'll be able to finish them for this weekend's game! I'm excited to see how the landmines work out rule wise and the railroad will be for show. 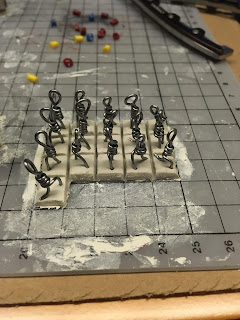 The final update is more armatures! As you see I've made 16 armatures for more "War of Resistance" miniatures. That is what the Second Sino-Japanese war is called by the Chinese. 8 for each side and these guys will be sculpted out of green stuff. These will take around 7-11 days to complete fully as I'm going to take my time with them. First do the feet then let that cure; then the legs, then that cures, then the torso etc. I also need to finish up the rule book so I can get that printed so that is another thing I've been working hard on. I'll add the Japanese forces, the campaign rules, and some smaller details tonight then send it off to be printed!

I've also been painting some Skaven for Blood Bowl and making some EFL miniatures but that is on the back burner at the moment. Well, I'm off to finish the rulebook!