Yesterday I had the chance to give our rules another go but this time the forces were a little different. Still set in the Second Sino-Japanese War our battle took place in a small village. Chinese General Hua Li (李话）fled after his humiliating defeat at the hands of the Japanese General from Iga (whose name seems to change every battle).

This time there was actually an objective which was deployed similarly to how terrain is deployed. How the objective worked, since FUBAR doesn't have "turns", is that there was a counter. As long as someone was in the objective section when it was the initiative winning player's turn it went down by one. Who ever had control once it hit zero was the winner. If there were to be both players in the objective when it hit zero it would either come down to whoever pushes the other out or who had the most units in there, players' choice.

A couple of rules that we changed were how the unit experience was determined:

This way provided a more balanced but still varied force. Of course we also got to reroll one unit's experience like last time.

Another rule change was the adjustment of some ranges. Sub Machine Guns were now 5 inch range instead of 8, Grenades were now 3 inch range and could only be thrown by infantry men NOT by leaders or those carrying a special weapon and Pistols were 4 inches. As I wrote last time we also made the rule change to keep vehicles and weapons their own separate units which made the game flow much easier.
We kept the terrain generation rules the same and kept alternating until we set up all of our terrain "pool". Buildings were +2, Natural cover was +1 and the towers were just LOS bonuses.

The armies that were created were definitely different but at the beginning we felt that they were even. We rolled this time to see who would get the mortars and we felt the cannon + light tank of the Japanese would be enough to match the 2 light tanks of the Chinese. 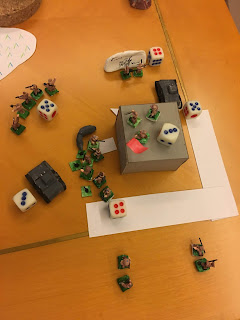 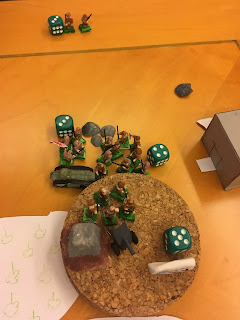 We then rolled to see where we would be deploying and since the Japanese won initiative they chose to deploy their forces first. Both sides deployed in terrain heavy areas unlike last time. The Japanese then went to activate their units first. 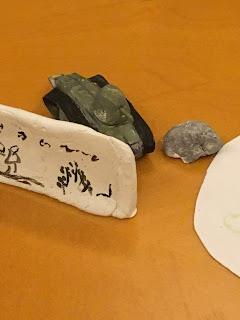 The Japanese tank activated and moved into a well covered position and killed the Chinese rifle team forcing the remaining two survivors off the map to never return. It was a good first activation but wasn't lead up by anything as the next activation failed turning the tide towards the Chinese.

The Chinese Mortar team opened fire upon the Japanese Cannon who took position at the top of the hill. They activated a random event ( a WIP rule at the moment) giving them a cover bonus. The mortar hit killing two Japanese and forcing them to flee from their cannon.


After that successful mortar attack the Veteran Chinese Light tank moved forward into the woods and opened fire upon the Japanese Light tank. The tank was destroyed leaving the crew suppressed out in the open. Needless to say the following activation would see the Veteran tank destroying the remaining crew members and tanking control of the sector.

After failing the next couple of activations the Japanese sat there taking mortar fire and being suppressed as the Chinese began to move into position. 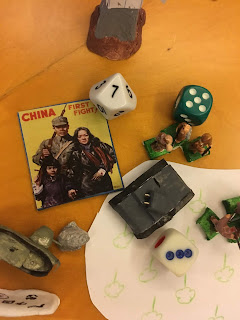 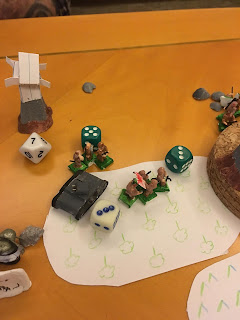 The Japanese finally got off some successful activations. The cannon crew and command team rallied together and charged the Veteran Light Tank lobbing grenades. They buttoned up the tank making it difficult for it to act. The Japanese Cannon crew got a special event giving them a bonus to their grenade throw.

The Veteran tank fought off the Command and Cannon Crew as it reversed out of the woods. It killed the rest of the cannon crew and the Japanese Command began to charge the hill in hope of stopping the Green tank which was damaging their rifle team.


The command team made it up the hill and managed to suppress the LMG team while throwing some grenades at the Green tank disabling the guns of the vehicle. The Japanese Command team was on their own, their rifle team had fallen casualty to the constant mortar fire and tank rounds.

The Command team had a shoot out with the Green Tank crew who were exiting the vehicle. Though losing a man to the tank crew's grenades they managed to kill them with their SMG. Having no choice after losing their banner the Japanese command team charged the LMG team in hand to hand combat that lasted two rounds.
The Japanese Commander sat alone on the hill as the last turn ended on the objective marker. He was surrounded by the Chinese and committed Seppuku on top of the hill after the humiliating defeat. And that was the game.

This game went pretty smoothly for the Chinese who killed almost all the Japanese except the Commander. The game ended because of the objective counter that the Veteran Chinese Light Tank captured by themselves and not by morale. (The Japanese had 1 morale left while the Chinese had 6 left). The rules flowed smoothly and mortars are very powerful in this game. There might be a rule change next time for firing indirectly. Morale works great and the Japanese command unit pulled off some amazing morale checks. We might add modifiers to hand to hand combat as it is deadly but its whoever has the best experience OR the most units is who usually wins.

It was a fun time and I hope you enjoy reading it,