So I'm continuing with the idea of my Fue'gel Campaign as I've now made the first version of the map. Here it is: 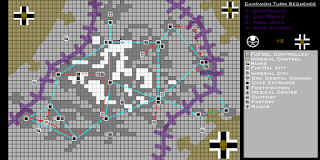 As you can see there are various icons that haven't been used and some things I still need to add to the key like what the dotted lines mean and various colors.

While working on the factory line I was thinking about possible rules for the game like how movement will work and what forts/outposts will do for the battles. I'm still trying to figure out how points are going to work in the game but I have one idea I like the best which I will explain later but first let me explain:

Movement on the game map will be determined by a die roll and the die roll will depend on your detachment's size. The first "draft" I have for movement is this:

What you would be rolling for is the number of squares you move across the map. Of course some squares take more than one movement point. Its simple but the complexity comes in not knowing how far you will be able to move. I was thinking of doing it based off unit type in the unit but I think this is simple and will be easier.

Units and some locations, like outposts and fortifications, have a Zone of Control that will allow them to attack others in their ZOC. This is where the combat matrix will come in during the "combat phase" of the turn. Each unit will choose an action and then play out the result (it makes sense if you look on page 273). Sometimes if you are in the ZOC of a location you will gain a bonus. Some example bonuses are:

Fortification: If fighting outside the fort you will get either reinforcements or a small barrage. Fighting inside you get the fort as the bonus.

Outpost: If fighting outside an outpost you get reinforcements. If fighting inside you get the outpost as bonus.

Ork Cannon: A large barrage is your bonus if fighting outside the Ork Orbital Cannon.

Radar: The defender gets 1st turn always and you can't steal it.

These are just some ideas and more will come out as I think of them.

This one has been a tough decision as to what to do to keep it balanced. Each location you capture will give you a set number of points each turn for you to buy stuff and new units. I've decided that points will not carry over as the defending T'au would have way too many points and could just keep saving them allowing the T'au to have large armies of XV8 crisis suits.

This seems to be a neat idea and an easy way to deal with adding units to armies. Some things you cannot build like Orbital Cannons and the Ruins. I was thinking ruins can be made after a battle if a fortification, outpost, city, etc is attacked and NOT taken over.

I was thinking of how the Imperial "AI" would work. I think I need to make random charts for each phase. One for battle, building and moving. I'm still working on the ideas for HOW the turn phases will go but I will figure that out and then I'd be able to make the random charts for them.

This idea seems to be really fun as now I'm planning on buying terrain and using ideas for solo play from these links:

The terrain I'm buying is from these guys:

They are cheap and good looking. After spray painting them and washing them they will look cool and add some "real" looking terrain to my ad-hoc terrain. Another thing I'm doing is buying a gray cloth to represent the sand so I don't have to see a glass table for the floor.

I hope this will be fun.

I hope you return to read more,